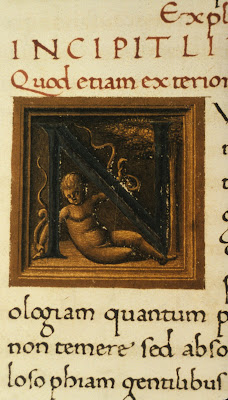 This is a detail from Harley 4965 f.127v in the British Library. The manuscript is an Eusebius (De evangelica praeparatione by Eusebius of Caesarea, translated by Georgius Trapezuntius) written out in 1482 in Florence. The script is commonly called humanist bookhand, though the Humanists themselves called it littera antica (in contradistinction to rotunda or littera moderna). This is the script that Drucker/McVarish confusingly call Humanist rotunda. The letters are “rounder” than those of either Spanish or Italian rotunda. They are also lighter in weight, have different proportions, and have either a few serifs (mainly on the capitals and the heads of vertical strokes). These is the type of script that Nicholas Jenson and his contemporaries in Venice in the 1470s and 1480s were trying to emulate in their types. Other pages from the manuscript can be seen at www.bl.uk/catalogues/illuminatedmanuscripts/results.asp?AttribID=255.