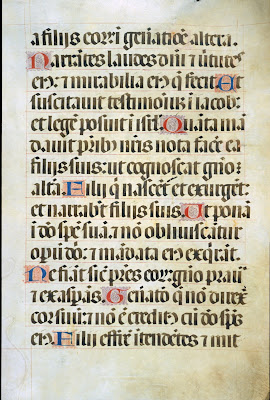 Rotunda was a southern European script and it was as popular in Spain as in Italy. Spanish rotunda tends to be narrower, more rigid and more precise than the Italian model. The example here is an undated sheet of parchment—it looks as if it could have been written anytime from the late 15th c. to the end of the 16th c.—which I bought ten years ago in Copenhagen. The writing is on both sides and there is no illumination. In comparing it to the Colonna Missal look especially at the “round” letters cited before and r, long s and x.