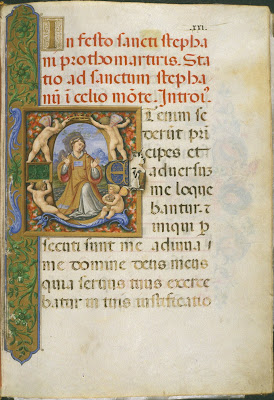 The term that I quibbled with most in reading Graphic Design History: A Critical History was “rotunda”. On the assumption that most of those reading Blue Pencil do not have paleographical or calligraphic backgrounds I thought it would be easier to understand my comments if I posted some examples of rotunda and of humanist bookhand.

This first image is Ryl Latin Ms 32, f. 21. For those not used to manuscript notation this is the 21st right-hand page in Ms 32 from the John Rylands Library in Manchester, England (f. 21 indicates folio 21 or recto 21). Although it is now in Manchester, the manuscript, known informally as the Colonna Bible because it was commissioned by Cardinal Pompeo Colonna, was originally written in Italy. The date is unclear, both 1520 and sometime after 1532 have been proposed, but for our purposes the exact date is immaterial. The fact that the Colonna Missal was written over 70 years after the Gutenberg Bible was printed may seem astounding, but liturgical and humanist manuscripts continued to be written, decorated, illuminated and lavishly bound into the early decades of the 16th c. century. See the remarkable catalogue that accompanied the 1994/1995 Painted Page exhibition in London and New York.

Although it is the illumination that makes the Colonna Missal famous, it is the letters that are my focus. They are a superb example of rotunda as I understand the term: a rounded gothic hand mainly found in Italy and Spain. The fact that this example is not from the Middle Ages does not undercut my argument. Letter styles often continued in use well beyond the decades or century in which they evolved. In the case of rotunda it continued in use in Italy into the 16th c. and in Spanish colonies (eg. Mexico) well into the 17th c.

The letters—we are speaking of the minuscules (small letters) since it is they and not the majuscules (or capitals) that are used to define the features of most scripts after the Carolingian revolution—are heavy and dark and most of them are narrow or compressed, but some are “round” (b, c, d, e, g, o, q and s) which is where the name rotunda comes from. These ”round” letters are not really round in the geometric sense since they are sharply broken in several place, mainly at the upper left and/or the lower right. The breaks make rotunda a gothic of medieval script. Similar rotunda letters can be found in the Carvajal Missal (Rome, c.1520) in Historical Scripts by Stan Knight and the richly illuminated choir books in the Libreria Piccolomini in the Duomo at Siena (written between c.1465 and 1519).