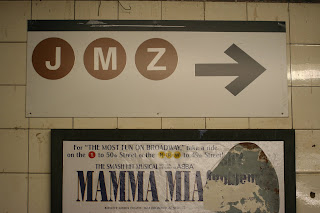 Read the complex story of how and when Helvetica entered the New York City subway system at AIGA Voice. The documentation for the article will eventually be posted here along with additional photographs of subway signage. In the meantime, to complete my research I am still looking for more photographs of the subway system taken between 1966 and 1980 showing signs, especially signs that have black lettering on a white background. (The sign pictured here is NOT from the late 1960s but is a temporary one in the Chambers Street station taken in October 2008.) If anyone has any such photographs please let me know.